‘[T]he late Irene Adler, of dubious and questionable memory:’ A Q & A With Leah Moore 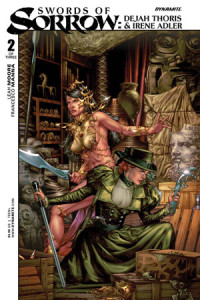 Leah Moore has written scores of excellent comic books, often co-authoring them with her husband, John Reppion. They’ve created Doctor Who – The Whispering Gallery, The Trial of Sherlock Holmes and have a contribution in the collection, In the Company of Sherlock Holmes. Just last week, the final issue of her Dejah Thoris & Irene Adler mini-series (within the larger work, “Swords of Sorrow”) was published, and I’ll have a review of all three up later this week. Despite being terribly busy, Moore was kind enough to answer a few (hundred) questions for us!

First, thank you so much for doing this Q and A!

LM: Thanks for having me!

Obviously, there are about a thousand questions I could and should ask you, but since this is for a website devoted to Sherlock Holmes, I am going to zero in on your work with Sir Arthur Conan Doyle’s characters.

It appears to me that your first published Holmesian comic outing was 2009’s “Trial of Sherlock Holmes,” published by Dynamite Entertainment and co-written with John Reppion. (If I’m wrong, please please set me straight!).

How did you become involved with this project? Had you ever written Holmes before?

LM: We’d never written Holmes before, but we were always huge fans of the character in all his incarnations. We had just finished adapting Bram Stoker’s Dracula into a big canonical graphic novel with missing text restored, and notes, and lots of very intense research, and so we were already in a Victorian frame of mind. Dynmite asked if we wanted to adapt some Holmes stories, and we thought, no way, Dracula was sooo hard to adapt, we’ll be clever and take the easy option. we’ll write a big clever original Sherlock Holmes mystery instead. We can make up the case, make up the whole thing, and it will be a piece of cake. Cut to us actually weeping trying to work out the details of our mind boggling plot while writing the third issue. We couldnt have been more wrong. To do a proper Holmes story, where it all makes sense and he can deduce things properly is soooo hard.

In general, did you grow up reading the Canon?  Is it a situation where you are, in fact, denied British citizenship if you are unfamiliar with Holmes?

LM: I imagine so, you possibly have to recite everyone who has played him, and what year. I’d totally fail it I’m sure. My geek fu is weak. I did grow up with the canon I guess, he’s never off the tv, and me and John were relieved that we both had Basil Rathbone’s  superb portrayal in mind throughout.

How did you and Mr. Reppion handle “Trial?” (Was he as fan of Sherlock Holmes prior to the series?) Did Dynamite have an idea in mind?

LM: We set out to do a mystery that would really grab the reader, so being showoffs, we picked an impossible locked room mystery. We wrote a killer first issue, and then had to basically write our way out of it, sove the mystery, and take the reader along the whole journey of discovery along the way. It was a great writing excersise, but wow. really hard.

What did you find most challenging about writing Holmes for that series? Do you still find him a challenging character?

LM: We found writing him hard because wherever he goes he deduces out loud about stuff, so when you need for the reader’s sake, to spin a story over six issues, you can’t have Holmes turn up in issue one, and say “Aha, clearly the fellow is there, behind the azaleas” or it’s a short series. The challenge was drip feeding him the info, and keeping him and the characters from getting too comfortable. They can’t know too much, and they can’t talk too much. the mystery has to win for a while.

Right now, I’d like to zero in on your most recent work on “Swords of Sorrow.” It’s an exciting project in and of itself, but it’s also particularly intriguing because it features the unsinkable adventuress, Irene Adler!

When I first flailed all over Gail Simone (who was incredibly nice about it), she immediately pointed me to you as Irene Adler’s scribe. How did you come to be a part of this project? Did you know at the beginning you would be writing Adler? How did ready yourself to take on the character?

LM: Gail asked me to write Irene Adler and Dejah Thoris because she was doing this whole Swords of Sorrow event, and she was a big fan of our Holmes work. She thought I’d enjoy writing Adler and she was so right. We’d already looked at “Scandal in Bohemia” in our research for both our Holmes books, and I was already intrigued by her as a character. I’d seen the modern series where she pops up as a sexy love interest femme fatale, but i really saw her as much more than a sex object. She’s a fully rounded character with great personality, and charm, even in her brief appearance in the canon.

I’m going to try to avoid spoilers, because the series has just started and I don’t want to be trounced by other readers, so I’m going to be as delicate I can about asking questions. How well do you feel Adler is equipped to deal with landscapes and people that are “otherworldly?” What gives her an edge in a world with Dejah Thoris and Vampirella?

LM: I think Irene has the power to read the details of a situation, which people might see as Holmesian, but is really just ‘Paying Attention’, so wherever she ends up, she’ll be able to read the situation and figure out the best course of action. she also doesn’t suffer from any of the interpersonal issues that Holmes has, able to deduce on the run while chatting to her companions and with a wry sense of humour. I LOVE writing her.

Did you have an opportunity to sprinkle canonical Easter eggs through your issues? For example, we see Adler dressed … a certain way … in the first duo issue. I loved that. It wasn’t forced, it made absolute sense, and yet it felt like the Holmes fans in the crowd could do a little celebratory high five.

LM: I did include a couple of canonical easter eggs, but I wanted to make sure it wasn’t too knowing and self referential, I wanted to give her a real fresh lease of life, and promote her from being a bit part in somebody else’s drama.

There has been a great deal of discussion in the Sherlockian community about what makes Irene Adler so beloved. Do you think comic book readers who may have little to no experience with Holmes will embrace her? Do she have crossover potential to a wider audience?

LM: I think so yes. She’s a really cheeky, clever, funny adventuress, and that’s appealing to anyone I think. She’s irreverent, and she really blends the canonical characteristics with a recognisably modern point of view, which I have tried to make as engaging as possible. With our Holmes books we kept them as dry, as factual and as correct as we could, but with Adler, I took the liberty of having a bit more fun.

What I really want to ask you is, “Where is Godfrey Norton?” Please tell me he isn’t dead – that would be sad. He seemed like a stand-up guy.

LM: Well my story is set four years after SIB, so a lot could have happened. I don’t address it in the series, but I’d be happy to elaborate in a GN about those years? If anybody wants one, I’m sure Dynamite would be open to suggestions!

After “Swords of Sorrow,” will you have an opportunity to write more Holmesian characters? Seriously, can we get a spin off where Adler just goes on adventures with other classic characters? Could she grab Kitty Winter, Violet Hunter and Lady Brackenstall and just tear up universes with their collective excellence? We could do a Kickstarter, that’s all I’m going to say.

LM: Oh god yes please. I would write that in a heartbeat. Kickstarter, or petition Dynamite, or whatever we can do. I need to write MOAR.

In general, what is it like to be a woman in the comic book industry writing female characters in comic books? Has the situation changed in recent years — is it (hopefully) a more positive experience?

LM: My god has it changed. I have been in a ‘women in comics’ panel at almost every convention I have ever been a guest at. They are a well meaning hazard for female creators. They get a bunch of us together and we talk. We used to kind of kick about stuff to do with the increasing female readership, or the amount of great female editors etc., or maybe talk about our favourite creators, but we never ever tackled the actual fact that being a woman in comics means smiling and nodding at a lot of poorly drawn hypersexualised nonsense that serves only to degrade women and objectify them, so that cosplayers get assaulted, and teens picking up comics for the first time are likely to be redirected to something more wholesome. I very much saw that lamentable state of affairs as the background noise of comics. If I, as a woman, wanted to come play with the big boys, then the melon breasted spandex fantasy sex dolls were just part of the deal. The violence toward female characters? Just a genre trope. The lack of female leads in books? It would be weird to have more than one. If she can also be black or oriental, that ticks those boxes too. The rest of the team is white and male.

Nowadays, and thanks to creators like Gail Simone, Kelly Sue Deconnick, Fiona Staples, and many many more, things are shifting to a point where women don’t feel pressured not to have that conversation. They feel there is a space to talk about it at least. The Eisners this year had so many amazing women in there, winning on all kinds of books. Comics are diverse and plentiful, and so are female creators. I’m so glad I got to see that change, and I hope, in my own work, to be a small part of it.

On that note, it seems like “Swords of Sorrow” attracts a strong female readership — do you think that’s reflective of the plot/characters, or are more women reading comic books as a whole?

LM: Both. Women who enjoy comics will definitely enjoy what we are doing with Swords of Sorrow. I think men will love it too, but women have spent a long time with these characters being written by men, and their stories have been a reflection of that. With women behind them, I think there will be a fresh approach all over, and you’d have to be actually dead not to enjoy that.

Thank you so very much! Will you be attending New York Comic Con by any slim chance? I am about to lay myself prostrate in front of someone and beg for a Sherlock Holmes panel, but I’m trying to figure out who may be coming to town before I get on with it.

LM: Argh. I so wish I was. When I do finally make it to the states for a con I too will push for a Holmes panel, that would be awesome! 😀

Deprecated: Function create_function() is deprecated in /var/www/wp-content/plugins/bbpress-post-topics/templates/comments-bbpress.php on line 15

This topic contains 0 replies, has 1 voice, and was last updated by

You must be logged in to reply to this topic.