Entertainment Weekly has finally confirmed a rumor that was all confirmed by its own existence: the upcoming BBC Sherlock special will take place in Victorian times.

For the eagerly anticipated Sherlock special episode, Holmes and Watson are essentially going back in time.

Co-creator Steven Moffat has now confirmed the special will take place in Victorian London, validating fan assumptions about the episode. Last month the show’s stars Benedict Cumberbatch and Martin Freeman were spotted filming Sherlock in 19th century clothes, causing fans to wonder if perhaps the crime-fighting duo attended a costume ball, or ir perhaps it was just some kind of dream sequence within the special. But no: The 90-minute episode literally takes place hundreds of years ago.

“The special is it’s own thing,” Moffat told EW before attending a panel at the South by Southwest conference on Monday. “We wouldn’t have done the story we’re doing, and the way we’re doing it, if we didn’t have this special. It’s not part of the run of three episodes. So we had this to do it – as we could hardly conceal – it’s Victorian. [Co-creator Mark Gatiss] and me, we wanted to do this, but it had to be a special, it had to be separate entity on its own. It’s kind of in its own little bubble.”

The special is pretty much finished, Moffat added, and he’s very pleased with the result. No air date is set by Sherlock networks BBC and PBS Masterpiece, but the special is widely expected to air in the UK around December. 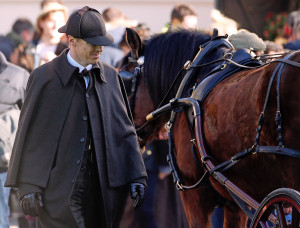 Post your thoughts in the forum! (and how about EW’s “literally takes place hundreds of years ago”? Always 1895, indeed!)