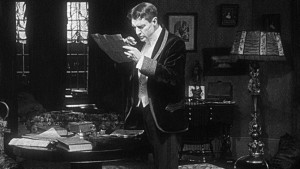 Oh wow, what a night!

Yesterday (Saturday, September 19, 2015), a group of Holmesians who are affiliated with my local scion traveled to Connecticut to attend a screening of the recently recovered 1916 William Gillette “Sherlock Holmes” silent film.

But we weren’t going to see the film at some random movie theater — oh no! We went to Gillette Castle, where the Friends of Gillette Castle were going to screen the film in the visitors center. Honestly, how perfect?

We gathered at the home of two very hospitable Holmesians to have drinks and nibbles prior to the show, which was just a lovely way to kick off the event. From there, we headed off to the state park. 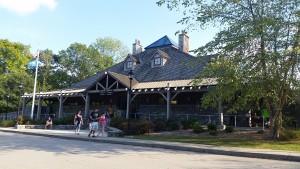 Prior to the presentation, we were treated to delicious little sandwiches and local wine. We attended the 5 p.m. screening, and I was told after the event that all six shows this weekend (5 and 7 p.m., Friday through Sunday) were sold out. Congratulations to the Friends! The evening was beautiful, and it was possible to glimpse the castle through the trees. Unfortunately, the tours for the castle were over, but I’ve visited before and it is very interesting. Apparently, Gillette was a super cat lover (having 17 or so?) and parts of the castle were designed to be cat-friendly. Obviously, I knew then that Gillette was a superior human being, beyond Holmes and whatever. 😉 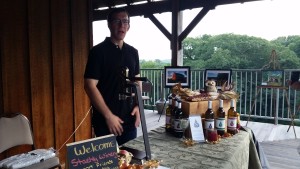 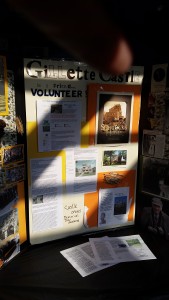 Gillette impersonators Tyke and Teddie Niver were on hand to greet everyone and pose for pictures — they are so fun. 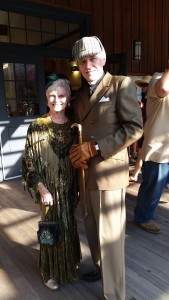 Prior to watching the film, the Nivers gave a bit of the backstory, and then told us about their trip to San Francisco for the film’s premier. It sounded like they had a smashing time. 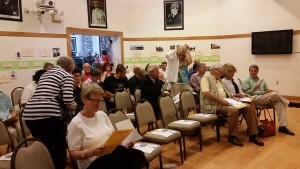 Now, regarding the film: Here be spoilers. One non-spoiler: I thought it was beyond charming on so many levels. Onto the spoilers. Do not read any more if you want to see this movie with zero plot awareness.

The Nivers offered a few opinions on what was working well for the film, and what elements were less effective. They were spot on about how (relatively) subtle Gillette was a Holmes, in comparison to the others. Except Watson (Edward Fielding), who was also pretty naturalistic (for this time period in the history of performances). The minor league villains — the scheming Larrabees — had the crowd hooting. Especially Mrs. Larrabee. Bless Grace Reals.

Moriarty (Ernest Maupain ) was precious — that man knew how to stare! (Also, I will never not think it’s adorable when Holmesians boo and hiss at any mention or glimpse of Moriarty. It’s too cute.) I enjoyed the villainous over-acting because it seemed so fun.

The one I wanted to throttle was Alice Faulkner, played by Marjorie Kay. She was beautiful as the film’s ingenue, but oh my sweet gracious, she was as flouncy as the day is long. Unlike the hilarity of the villains’ hyper-acting, she just came off as pitiful, especially when you consider that ACD gave us some really brave and strong female characters. There were more than a few times I just wanted Gillette to roll his eyes and give a Jeremy Brett-style wave as if to say, “OMG, come on I don’t have time for this I need more nicotine COME ON.” Once the romance was revealed, I wanted to fridge her. I’m sorry/not sorry.

Back to Brett for a second, though. The Nivers commented on how elegant Gillette’s hands were. I completely agree. I was immediately reminded of Brett and his hand-acting. I think Gillette took off his gloves at least twice. And it was damn near pornographic. He was also pretty handsy all over the place, especially with Watson. That was surprising and actually very fun. He patted Watson on the shoulder a number of times, and, when the truth of his budding love for Alice Faulker was revealed, Gillette grabbed Watson’s lapel and sort of man-handled him. It was awesome. It was as if his Holmes was saying, “Watson, I’m in love and I don’t want it! You’re a medical man — fix this!” Sadly, that was not what I read on the dialogue frame. 🙁

One odd hands-related thing: At least twice, Gillette would pluck at his pocket handkerchief, then swing his hand back and forth. I was completely puzzled — the movement seemed very deliberate, but I didn’t understand what the gesture meant. Unless it meant nothing. But it really seemed to mean something.

Gillette’s Holmes was pretty much cool as hell. While everyone was freaking out and hysterically acting with their eyes, his Holmes was chill and just waiting for the baddies to screw up. I loved seeing him don a beautiful dressing gown. What killed me, though, was that, in one scene, the collar of the dressing gown got caught at Gillette put it on. During the 98% of the scene, the collar stayed popped, and I was itching to smooth it down. Then, for two seconds, the collar was flat and Gillette looked suave. Next frame, BAM, collar back up. I was so irritated at whoever didn’t stop the action and smooth his poor collar down. Holmes really shouldn’t look like an ‘80s preppie.

I was so, so, so charmed by Fielding’s Dr. Watson. First, he looked like an army doctor (huzzah). He was fit and a sharp dresser. Fielding actually reminded me so much of Martin Clunes as ACD in the recent “Arthur & George” miniseries. He was rather funny too — in their first scene together, Watson is arriving at 221B at the same time Holmes is bustling out to solves some cases. Holmes grabs him and urges him to sit down, take a load off and read a newspaper. Watson seemed rather irritated but not wholly surprised. Later on in the film, Watson is shown again, now completely peeved that Holmes has run off and not returned to … talk with him? Have tea? I don’t know, but I loved his reaction.

One awesomely weird moment was when the film shows the exterior of Watson’s medical practice. The plaque on the building reads “G. WATSON, M.D.” So many people around me started whispering, “Um, what? Does that say G? Who the what?” I don’t know why they would name him G. Watson. What’s wrong with John? Or James? Just go with J if ACD confused you that one time, Mr. Scriptwriter!

I was quite chuffed that they gave Watson a medical practice, though. And Watson was obviously banking, because his office was HUGE and BEAUTIFUL. The latter part of the film (it’s broken into four episodes) was set in Watson’s office, because 221B had been badly burned. I’m not sure if Moriarty burned it, or if Holmes fell asleep with a lit cigar. I must have missed that relevant plot point.

The plot was a sort of mashup between “Scandal in Bohemia” and “Final Problem,” with some hints of “Copper Beeches” maybe? Holmes uses a fire to force Alice to reveal the location of the secret scandalous letters (so, well, there’s also the element of “Naval Treaty” too, huh?). Then there is the fantastic confrontation between Holmes and Moriarty, who is referred to as the “Emperor of Crime.” I don’t know why they chose to change “Napoleon” to “Emperor,” but there you go. Moriarty is all, “I’m gonna git me that Holmes cat!” and Holmes is all, “Bring it.” So Moriarty tries to get everyone out of Baker Street in order to go over there and shoot Holmes. What this really boils down to is poor Billy the page getting the crud beaten out of him by a thug. It was a great fight scene, and little Billy’s uniform gets halfway ripped off.   Uh, okay. Moriarty and Holmes have their tête-à-tête, but sly Holmes removes all of the bullets from Moriarty’s gun, so moo ha ha, Moriarty is totally foiled. Gillette was so slick, just letting Moriarty flail around and act with his eyebrows.

Overall, I loved the film. I can’t wait to own it and watch it again to pick up on other details. It was so exciting to see Gillette in action. I don’t love deerstalkers as a rule, but when he came on screen with his little deerstalker, I was completely charmed. It’s amazing to me that this film was found and restored so beautifully. I highly encourage everyone to see it. Four thumbs up.